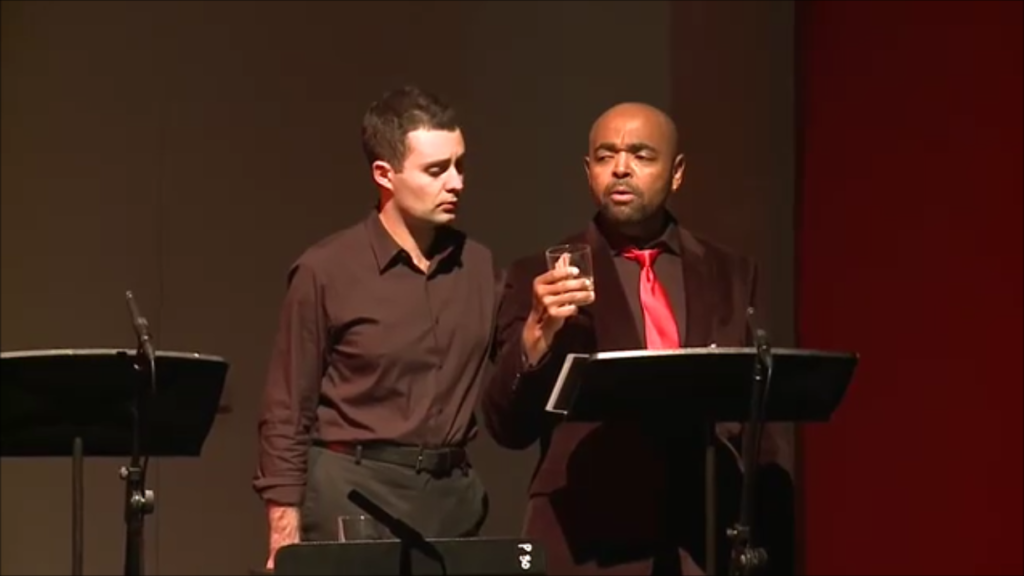 Mark Nimar as Phinneas, Roland Burks as The Father

Phinneas, a thief, sits next to an older man at a bar in Hell. Phinneas is exuberant, since his day of vacation on the surface of the Earth is coming soon, an event which only happens once in a century. Phinneas offers the other man a drink as he picks his pocket. The man then laments his eternal punishment; alcohol has no effect on him in Hell. While alive, he was drunk and numb to the suffering of his victims. In Hell, he feels terrible remorse for all his crimes, yet alcohol provides no relief. The two men reflect on their fate, and their only source of comfort – a one day trip to the surface awaiting them at the end of a century.

Anna, a young woman, lives in a village on the surface close to the gates of Hell. She is sitting at her counter, surrounded with dead visitors on their day off. Anna has been waiting on customers at the inn since her father died. As she daydreams, Phinneas enters the shop, and lays his eyes on Anna. He speaks to her, but she does not understand his language (note the convention of the opera is that they both speak English, though it is clear in action and text that they do not understand each other). Phinneas remembers that in Hell everyone speaks the language of the damned, but here on Earth everyone has their own language. He offers Anna jewelry and money, which he stole. Anna recognizes her father’s marking on a bill he offers her, one that he stole from the old man at the bar. Even though they cannot understand each other, Anna and Phinneas are attracted to one another. They are drawn to the sound of each other’s voices and the longing and loneliness therein. They kiss, and Anna leads Phinneas to her bedroom at the rear part of the store.